The main activities for this morning for students was to undertake a behind the scenes tour of the Caravelle Hotel.  While to tour was amazing the bigger lesson of the morning was networking.

Whilst having breakfast in the Caravelle restaurant the group was recognised by their tour Western Sydney shirts and were approached by Australians who were also having breakfast.  Below is a photo of the group with the Australian Consulate General for Vietnam Karen Lanyon.  Through the chance meeting and discussion with Karen she has suggested ways in which we may be able to work together on some hospitality projects in Vietnam and is keen for us to catch up next year when the students return. 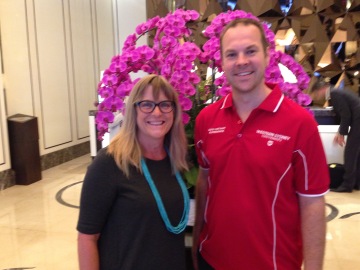 The group then undertook the tour of the Caravelle which started with a meet and greet with Director John Gardner and new General Manager Michael Robinson.  Both gave wonderful insights of their careers in hospitality and working in an international context and some pertinent career advice for students looking to move into the workforce. Together they spoke to the students for the bet part of an hour. We then undertook what I think is by far the best hotel tour I have participated and were joined by Rooms Division Manager Morgan Ulaganathan who had actually requested to meet the group as he remembered industry partner talks from when he was a student. 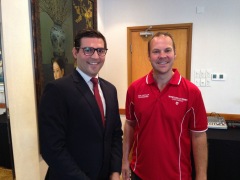 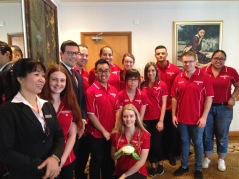 For two students this day became more interesting when one student asked about a contact mentioned at a hotel she wants to work at in Sydney.  I encouraged her to shave a conversation at of the end meeting to follow this up further and now had her resume being sent directly to the HR manager in Sydney.  For the second student she was inspired by the   the whole family feel amongst the Caravelle staff and approached me at the end and asked about doing an internship and I was able to arrange a sit down with the General manager for later that day where he spoke with her for 45 minutes.

To put this all into context, the night before the hotel suffered a water leak which shut down two kitchens and required one breakfast service to be moved to another area of the hotel – yet all of these senior managers still made time to speak with the students and at no time seemed in a hurry to leave.  Great lessons in networking and giving back to the industry and the next generation.