As part of the growth in increasing fan engagement and experience at game days some teams are now looking to offer fans unique ‘once in a lifetime opportunities’ and also increase the use of stadium activations which extends the ability of a brand to communicate with fans, rather than just being a name on a jersey or stadium.

At a recent GWS GIANTS AFL game there were a number of examples of both these principles in action.  At the start of the game fans who had previously entered a competition were given the opportunity to form a guard of honour for the players as they entered the ground ready for the match.

The sponsorship from Toyo tyres was used as a form of three quarter time break entertainment in which a fan is given the opportunity to kick the ball 40m into a stack of tyres.

After the match fans were invited back to the GIANTS headquarters for a meet and greet with players, as well as partaking in kick to kick on the training ground, while kids were able to take advantage of the inflatables which were provided.  As can be seen this activity proved popular with the fans. 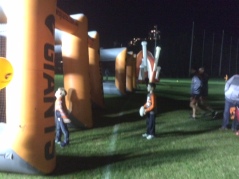 Another initiative which was undertaken as part of the fan engagement was what was termed the “Peoples presser” or peoples press conference in which the fans were given the opportunity to ask the coach and players any questions in a press conference style forum which is normally reserved for the media. 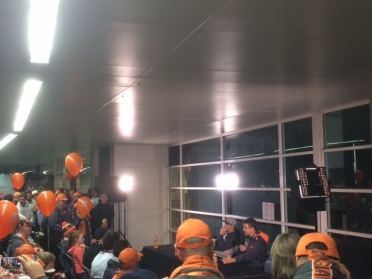 While these initiatives certainly do enhance the fan experience, some are also highly reliant on availability and accessibility of players and coaches who are able and willing to participate in these activities.  in searching for increased fan engagement and stadium activation, teams will need to continue to involve but certainly not rely on access to players.  In talking with corporate membership managers from other codes, coaches are often not keen to have their players taken away from training to participate in what they consider non core activities.