When you look at Pine and Gilmore’s exploration of customer experience that talk of the business being the stage and employees being actors.  Organisation will ask employees to perform roles and will regularly provide training on procedures and product/service information.

If you are asking employees to perform a role, shouldn’t the ability to act be as important as product knowledge?

On a trip to the Old Dubbo Goal in outback New South Wales, Australia we decided to check out Old Dubbo Gaol as one of the local tourist attractions.  When we entered the reception area and small shop full of memorabilia we were greeted by a very helpful young lady who not only provided tickets to the gaol but also informed us of the up coming guided tour and also about the night tour which was available.  After making our way into the gaol we made our way into the grounds of the gaol and waited for the guided tour.

Soon we were greeted by a lady in period dress by the name of ‘Tillie’ dressed in period cloths and informed that Tillie was ‘visiting’ the gaol for a little bit.  She proceeded to show the group through the gaol, with an informative narrative highlighting the antics of some of the former inmates of the gaol.  We returned a day later for the evening show (of which there were two, one kid friendly and another late night version) to gain find our friend Tillie who on this occasion was accompanied by a prison guard.  The tour saw the group move between the Tille and the guard and sometimes entertained by both as Tillie constantly tried to outwit the guard and escape 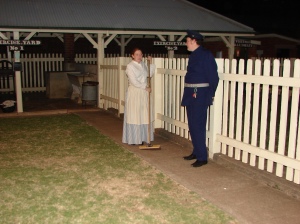 At the end of the tour I spoke Tille to ask her about her training and she indicated that he had a background in performing arts and all staff filling the roles were required to undertake some for of training based around improvised theatre.  An example of how this benefits the tour is when the guard first appeared and my son put up his hand an instead of asking a question announced that “when I grow up I am going to be a policeman”.  Later when a group of children were caught trying to help Tillie escape the guard looked at my son and said “and you want to be a policeman!”

Perhaps one day we will see organisations offering jobs in the service and experience economy asking for some form of acting qualifications to assist staff better perform their roles.  Old Dubbo Gaol seem to embrace this notion and perhaps that is why the helpful lady at reception had a striking resemblence to Tillie.